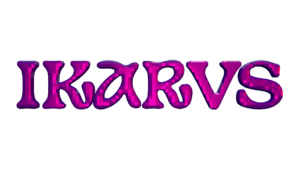 BIO PO POLSKU
IKARVS is a project based on instrumental and vocal improvisation, which is the core of both their compositions and live performances.
Oscillating around the hypnotic downtempo, the duo goes far beyond genre conventions. Heavenly chants in an instant become ghastly modulated vocal loops, surrounded with guitar inspired by funk, cumbia and psychedelic rock. This seemingly chaotic mosaic is glued together by a steady, slow rhythm and bass pulsating deep below the surface.
In the concert setting, IKARVS is an electroacoustic live act designed in a way that enables a trance, introspective musical journey, as well as spontaneous interaction with the audience. On stage, the duo transforms into creatures of unreal appearance and dance, which guide the audience through this unique experience.
Since the beginning of the duo in 2018, IKARVS has already performed, among others, at the Fusion Festival in Germany, Summer Contrast, LAS festival, or in places such as Schron, Transformator and Bar Studio. In July 2021, they have their debut EP released on Berlin based label, DowntempoLove. In October their music was released in Hupupa Records and Oramics.